The Mindset of Four Feral Cats 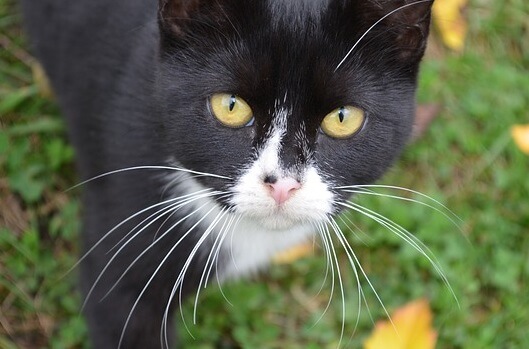 The below paragraphs share the lives of 4 unrelated feral (or feral to domesticated) cats.
Muffin—from feral to still feral:

gratitude for Kathy, who feeds him regularly and looks out for him. Although he has zero interest in allowing himself to be touched, he relayed that he WAS demonstrating his affection by spending time with his caretaker on her porch.

So what allows Muffin to thrive? Happiness. His joy is being outside and having his freedom. Freedom to choose when to come and go. During an initial talk with him, he likened himself to being like a ‘wild squirrel’. In other words, very much like a wild creature. Muffin is also smart and on more than one occasion has led other cats in need of medical care to Kathy’s home. He enjoys the way he lives and at this time declines being an indoor/outdoor cat despite the invitation. He has mentioned potentially considering it when winter arrives and his paws get cold but for now, he’s content to lead his current lifestyle.

New Cat — from domesticated to feral:

Another feral whom we’ll call “New Cat,” has recently taken up residence under the deck of a client in Ohio. New Cat is timid, untouchable and underweight. He explained that he used to have a home and family of his own but that he was not fed consistently and they no longer let him indoors which confused and saddened him. He was forced to wander to find food since he was so hungry. His feral behavior is a survival coping mechanism.

He said that the woman whose deck he is now under, has an energetic sign in her yard that to stray cats reads, “The woman who lives here speaks and understands cat” and so he arrived. This owner cares for other outdoor cats and recently explained to New Cat that she wold grant him permission to stay IF he followed her rules. He must not fight, hiss, chase or bite the other cats, must readmit one back that he’s scared off and must allow himself to be neutered. New Cat has agreed to accept her terms and time will tell if his actions will match his words! His greatest request at this time is simply food and shelter.

Steller— from feral to semi-feral:

There is another semi-feral cat named Steller who lives on the same property as New Cat and is truly amazing to speak with. He chooses the semi-feral outdoor life in order to come and go and do his energy work with the earth. He sees this as his job and this is often why he is away on extended excursions. Since he’s so skilled at working with energy, he has agreed to help the homeowner discourage other stray cats from moving onto the property. He does this by being neutral in attitude (he doesn’t fight) but by putting up an energetic barrier instead.

Steller explained to his person that there was an energetic “yellow brick road” leading to her home that many passing stray cats see, allowing them to find her. He explained that his own energetic sign and boundary would help to dissuade them from following the path in, helping keep the current numbers she cares for, what they are.

After getting to know the homeowner, Steller has gone from feral to semi-feral and now allows touch and grooming. He is very adamant that ‘nobody owns him’ but rather he owns himself.

Marvin arrived one day quite feral but explained that he once had a home with people. Being on his own made him get tough in order to survive. After a time, the woman feeding him called me and gave Marvin the choice of become an indoor only cat if he wanted that, as long as he was willing to coexist nicely with the resident dog and long term cat resident.

Conversations to remind him about polite cat etiquette proved worthwhile in helping him to let go of old defensive behaviors that erupted now and then. At present time though, Marvin is content with the other dog and cat and even follows his person around the home with immense adoration for her. He has put his feral days behind him and has softened into a sweet, affectionate boy who isn’t missing the great outdoors.

In Joy of the Animals,