Getting Free of My Fear of Spiders 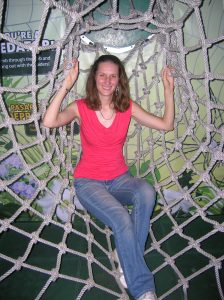 I remember being a child and being very afraid of spiders. It did not matter how small or large they were, they terrified me. It certainly didn’t help that my sister would pick up a spider in a tissue and chase me around the house with it too.

Until three years ago, I basically avoided them at all costs. Growing up, in my college years and in my twenties, I now regret that I would throw books on them to kill them if there was nobody else around whom I could call to get them for me.

My biggest concern was that they would jump on me and ‘get’ me.  While some people react to snakes, bats or mice (none of which alarm me) the spider species was my personal hurdle.

When I first began learning animal communication in 2005, I certainly had no specific plans on releasing my spider fears. It took six years but I was able to release my fear quite naturally me even trying to ‘work on it’.

So what started my ‘healing process’? It was during an advanced animal communication class I attended in 2005. We students were asked to do an exercise where we were to energetically merge with an animal. Not just any animal though, it had to be one that we feared or disliked.

My experience of merging involved closing my eyes and asking a representative of the spider species to energetically present itself to me. A tarantula arrived to me and I was able to set aside my own emotional baggage of fear long enough to perceive what it was like to walk on 8 legs and to feel the calculated movements each leg made.

this spider had and to feel how it felt connected to it’s wild rainforest environment.  I could also sense how it truly had zero interest in jumping on people. It would instead prefer to shy away from my large body if I came close.

As life went on, I began talking with more spiders over the years that I’d find outside. These experiences changed me. These beings would respond in fear or defense if I was afraid of them but if I was calm, they were calm too. I discovered time and time again that they had no desire to be on me or touch me and certainly not to have their life snuffed out by me. My fear transformed into curiosity and later respect.

These days, when I find spiders in my home, I put a jar over them and slide an index card underneath. I am careful to not injure their fragile legs when I capture them for release.  I also have energetic barriers around my home as well as an energetic message to dissuade them from coming in. Here’s my video for this process:

Now let’s fast forward to just a few weeks ago when I was at the Butterfly Pavilion here in Colorado. Aside from seeing the butterflies, I wanted to hold Rosie, one of the many rose-haired tarantulas that the public is invited to hold. I wanted to experience firsthand, just how far I’d come with spiders.

I found Rosie to be amazingly soft to hold. She was surprising feather light as well. She crawled on and off my hand with total ease. I was intrigued.  There was no fear.

I spoke telepathically with the Rosie, the tarantula I had held that day, through a photo that I had taken, I learned much.  She liked to be held gently and with stability. She felt safe that way. She would tire quickly walking on people’s hands. She could also sense the moisture and temperature differences between each person and she had an awareness of detecting odor in a way that felt more vibrational in nature than in smell.

A staff member relayed that they had many ‘Rosies’ and that each would work for 2 hours a day, once a week.  I thought that was very kind of the establishment to put such a safeguard in place since it took energy for the tarantula I spoke with to be continually placed on and invited to walk on and off adjacent hands for 2 hours in a row on such tiny legs.

So where am I now? I feel fully healed of my childhood fear.  As in the movie ‘Avatar’, I finally really “see” them. I see them for who they are far more than I ever did through the lenses of fear.