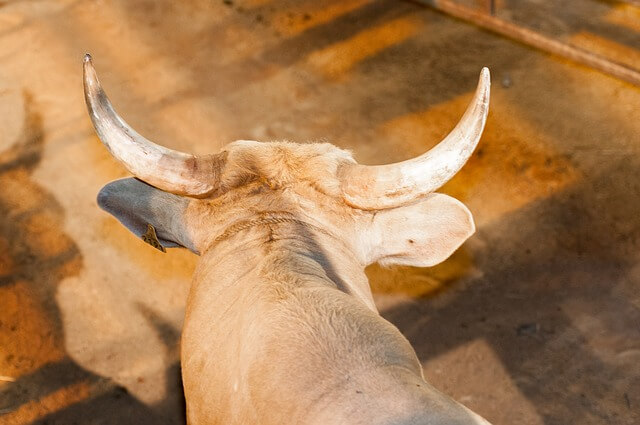 A month ago, I decided to offer my past and recent animal communication students the opportunity to practice their skills in a practice session in talking with a deceased, award-winning, famous rodeo bull named Little Yellow Jacket.

Many people question the ethics around the bull riding sport.  There was a time when I did as well, prior to asking animals questions around it.  I used to think that the equipment caused pain, which is what caused the bucking (untrue).

Why this type of practice?  Because a good animal communicator can set his own beliefs and opinions aside which is so helpful in accurately hearing what an animal truly has to say.  I wanted to offer my students the opportunity to practice this skill.

Little Yellow Jacket (1997-2011) was a large brown bull.  My students and I tuned into him in order to ask him about his personal experience in his career.

This bull expressed that when he was in the physical, what he appreciated most about himself was the power and strength within his body. He loved being strong and also loved the “game”  (that’s how he saw it) of throwing bull riders from his back.  He enjoyed his spine’s flexibility and his ability to thrust and toss riders up in to the air.

He shared that he thrived on the roar of the crowd and knew people were watching his performance.  He said how he loved to give the crowd a good show and believed the people were cheering both him and the rider on (though sometimes the crowd played favorites).

When I asked if he knew that the bull riders sometimes fell off and got hurt, he said that he wasn’t really concerned about that because he knew they understood that the potential for injury was part of the game. A known risk. He quite frankly didn’t dwell on it at all. If they got hurt, he didn’t feel bad, he was simply neutral towards that fact. He also relayed that their were times when, for certain riders and under certain conditions, he’d go ‘easy’ on them when he was bucking.

So what did he not like about his career?  Long trailer rides to and from places and waiting around in pens before and after his ring time.  He’d grow bored sometimes, but overall was pretty patient.  The intelligence of this bull was very present as well.  He understood what people expected of him and it pleased him to do the job of being a tough ride.

When asked how he felt about people, he expressed we are fine as a species and he has no animosity towards us. He doesn’t see us as mean or cruel. He felt he was always well pampered actually and looked after by the people who cared for him.

He felt respected by most of his caretakers and by the crowd. While he liked his career more, he also loved retirement which involved breeding with females. He also commented to us that he knew he was a good looking bull.

When asked if he felt all rodeo bulls or bulls in general would be as happy as he was being a rodeo bull, he replied, “No. Some would be fearful and not find it fun at all. Nor all are physically designed for the sport.”

When asked if he would consider returning to earth again at some point to be a rodeo bull again, he shared that while he wouldn’t mind it, he had other interests now in experiencing other ways of being, for his soul’s growth.

He did relay that he had purposely incarnates to be a rodeo bull in order to have the experiences that go along with such a job.  Little Yellow Jacket relayed that he has no regrets of his life. For him, bucking with riders was indeed a highlight for him.

For me personally, this is what animal communication is about— letting go of what we humans believe or think about such and such in order to ASK the animals about their life experience firsthand.

While I also do believe neglect and abuse can and does occur in animal sports, these days it’s a delight to discover that many of these animals find enjoyment in their career and life and generally don’t view themselves as victims of people’s whims, but rather know they are an infinite being who has chosen a specific incarnation in order to attract certain experiences.

Want to see this handsome fellow?  I lack the rights to publish Little Yellow Jacket’s photo on my site but you can see him on this website page.

In Joy of the Animals,