Communication with a Dinosaur 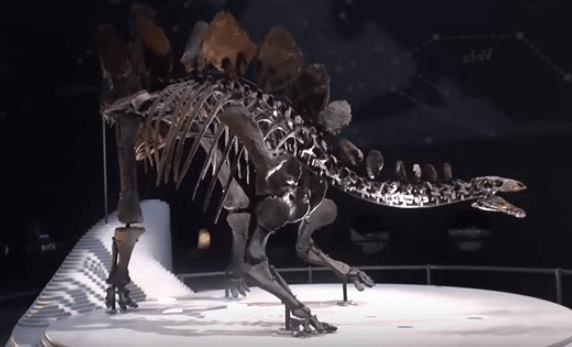 In 2003 in the state of Wyoming, a fossilized skeleton of a stegosaurus of unknown gender was discovered in a cave and given the name “Sophie”.

Her skeleton is unique in that is is 85% intact and is one of the most complete skeletons ever found. By using her bones as a launch point, I reached out to communicate with the being that once inhabited this particular body.

Sophie comes through with a very deep, masculine voice and says regarding why some animals become extinct, “Every animal has its time on earth. A time for arising and a time of completion. Extinction is not an ending, as you see it, rather a completion of certain life forms. It’s nothing to be sad about, it just is. All beings go through life cycles where they may evolve their body type down through the generations and after a time, fewer and fewer souls seek that particular vehicle (body type) for their soul growth, so the species becomes extinct. I am not sad because of it, it’s a natural way of things.

Regarding my own feelings and thoughts about the stegosaurus extinction, I’d have to say that we simply ran out of time. Our environment was changing by growing warmer and that changed what we could feed on and food became scarce. Our species numbers became fewer and it had nothing to do with humans overcrowding the planet. Our time of completion had come. Fewer souls wish to incarnate into bodies that are not adapted to the planet they live on, so our time came to an end… a finish.  It is not true that an ice age killed all the dinosaurs, like you were told. We died from various reasons. Earth underwent 2 drastic changes that involved climate and vegetative changes for my kind and these impacted our numbers greatly.

You are curious about my body and I can tell you about that. The plates on my back were little use for protection. Their purpose was to protect from above the ground attacks, as a buffer zone to slow down the attack of anything from above us, to give us enough time to swing around and face our attacker. They were not weapons. Our spiked tail could be used to keep small carnivorous mammals away from our hind end. We could pivot and swing ourselves around very quickly and powerfully. My eyesight was wonderful close up but I had poor distance vision. My sense of smell was great. We could walk and trot (our version of running).

We were mostly herd animals, though males would go off on their own at times. Our stomachs sought to eat specific plants. Our acids could break down certain plants but not others and when certain vegetation changed over, we found food scarce in the last 100 years of our species life. It is the natural course of things… all things come to an end in body…to be reborn as spirit and back round again into various other species types. So nothing really ends.. just changes form. Some of your dogs and cats have been dinosaurs in body. Just ask them.”